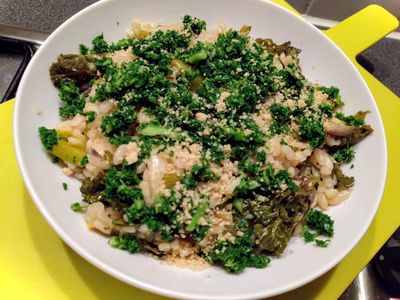 Risotto is something that I discovered pretty lately but that I really enjoyed making and eating it. It is part of a couple of recipe that I have that make endless combinations such as lasagne, stir fry…

This risotto is made with a lot of greens such as leek, kalette (this vegetable is a mix of Brussels sprout and Kale and it is so cute) and some chopped kale. In this recipe, I decided to cook together the chopped leeks and kalette and keep aside the kale so it can be chopped really thinly and then sparkled on top of the risotto as you can do with parmesan. As I just been diagnosed lactose intolerant, I like this idea to make some substitution with a parmesan. So for an even tastier recipe I made some homemade vegan parmesan with raw cashew nuts, sea salt and nutritional yeast. 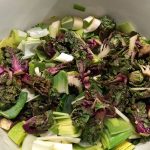 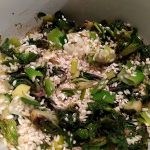 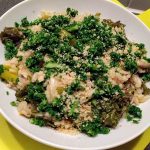 How to make risotto with leeks, kalette and homemade kale powder?

The vegetable should be slightly cooked, softer

2 Responses to Risotto with leeks, kalette and homemade kale powder