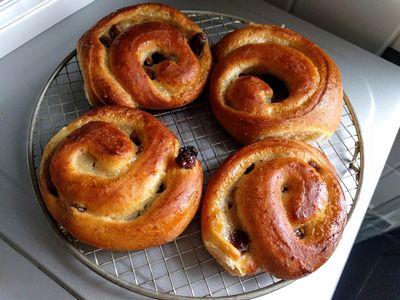 Since I am following a strict diet which excludes dairy product and eggs, I found it pretty frustrating to not be able to buy pastries. I am a sweet tooth and buying some pastries was a treat that I used to get some time to time. Not that frequently because I am baking a brioche every Friday night for having something sweet for the weekend breakfast. So back to my point, I was frustrated to not be able to buy those attractive pain aux raisins that could be found in various shops and coffee shop, so by a rainy Saturday, I decided to give it a try and do homemade one dairy free and egg free.

It was easier than I thought and really delicious. I decided to use my usual brioche dough as a base and then do the “custard” (I used my cooking food processor) with some sultanas. The process is pretty straight forward as the “custard” with the sultanas needs to be spread in the dough and then the dough needs to be rolled over and at the end sliced.

This recipe for sure will become one of my favourite for weekend treats. 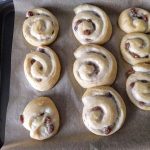 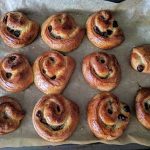 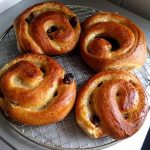 For the brioche dough:

How to make a dairy free and egg free pains aux raisins?

The proving will be faster in a warmer environment. If the recipe is done during winter, it could be good to let the dough rise on top of a radiator. Otherwise you can use one of the program of the bread maker which will keep a temperature around 30° for 40/60 minutes

Indeed, before using the custard, it needs to be cold and that could take at least 30 minutes

For doing the custard, I am using a cooking food processor (Companion from Moulinex) but that could be easily done in a pan. Just follow the step and don’t forget to stir frequently.

One Response to Pain aux raisins